This term’s Evening Activities programme is packed with goodies including Variety Club and Murder in the Mansion!

Run by Head of Science, Mr Frise, Variety Club features a different activity (indoor or outdoor) each week. This week they’ve been busy with a series of experiments involving rockets and eggs! The competition has been fierce (and very noisy!) as the children have watched to see who can fire a rocket the furthest and drop an egg without breaking it. So far, the Form III girls won hands-down!

Another popular activity, Mismatch Sports Club, has seen Miss Hadley in the middle of a five-a-side football league on Tuesday evenings. Everyone is enjoying it immensely, coming away red-faced and full of cheer.

We have such a large group of boarders on Wednesday evening that we have split them into two groups. One group completes an obstacle course in the Sports Hall while the other plays Murder in the Mansion. It still amazes me how loud they can all scream while running around the Mansion trying not to get caught!

With three groups doing Cookery Club each week, I am enjoying some mouth-watering treats including the most delicious cinnamon swirls, Snickerdoodle biscuits (a squidgy cinnamon flavoured biscuit) and scrummy scones.

Before the bedtime, the children have been watching Avatar, playing table football and air hockey, enjoying Tuck and generally having fun with their friends. The boarding house really is a hive of activity and fun, especially on these dark cold evenings. 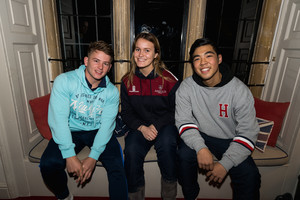 The New Year also saw the arrival of new Gap students at Ashfold. This term, we are delighted to welcome Ron and Kate from Australia. We are also thrilled that one of our former Gap students, Keegan, has returned to Ashfold from South Africa for a second stint as a Gappie. All three have quickly settled into the boarding life.

Also in the News

The Lion King and Pre-Prep Christmas

*
Cookie Notice: We use cookies on this site to improve your user experience.
Accept Find out more